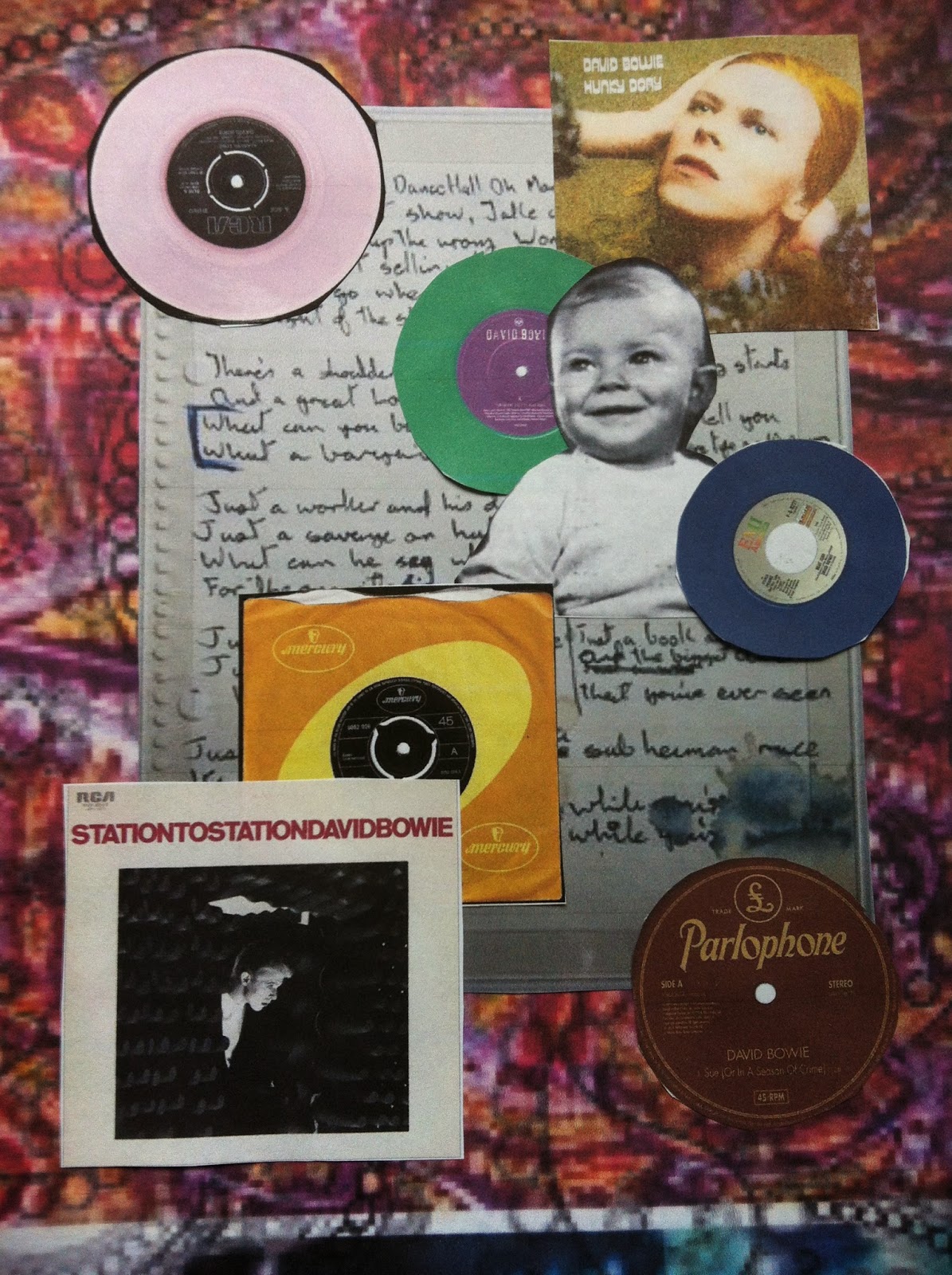 The show is called David Bowie Is and my family traveled to see it at the Museum of Contemporary Art in Chicago.

I remember just where I was and what I was doing when David Bowie and Bing Crosby sang Little Drummer Boy during the 1977 Christmas special. Apparently, Bowie himself doesn't remember it all that well. My young brain was clear as a bell and not compromised by substance. I'm not a rock star, so I'm in a good place for recall.

I am a person with an unapologetic enthusiasm and connection with popular culture. That's the place I'm coming from.

My husband Jeremy is coming from a different vantage point. He has the same pop culture roots as I do. But his relationship to Bowie's music goes very deep.

Anyone who knows Jeremy at all can tell you that he is absolutely passionate about music. Music of all kinds and all genres. He has always loved listening to music, sharing music, writing about music for his brilliant blog AnEarful, and during certain periods of his life has made music.

Jeremy can hear things in music that other people don't. He makes connections other people can't. He remembers stuff about every piece of music he has ever heard. He's not shy about spreading what he knows around.

I kept referring to the trip as a religious pilgrimage for Jeremy. This turned out to be no joke. His blog post about the show is here.

Our whole family went. We spent a little time together in there, then split up and each did our own thing. We were all content with this arrangement. It was the kind of show where it felt natural to do this.

I looked at some stuff quickly but didn't skip or skim over anything. What I do get to do was whatever I wanted. I've never done this in a museum before. If I wanted to watch Bowie performing a number on Top of the Pops five times in a row, then go back later and watch it three more times, I did.

I'd catch sight of Noah drifting about, swaying a bit to the music, quite engaged. They gave us headsets with music and commentary. Usually, I don't take the headsets in a museum. I don't want some dry voice telling me how to see and what to think. This was different - it was a large part of the artistry of it. It was an integrated and rich experience.

This part is what I meant when I said earlier that I'm intimidated. I've been to a lot of shows in a lot of museums. I am a museum type person. This was the very best show I have ever been to in a museum. The show was so amazing and so inventive that it actually re-defined what can happen in a museum and what a show can be. There was love and brilliance infused in the curating and design. Bowie made his entire collection available and I felt a grand sense of generosity in that. I kept saying that I am glad Bowie doesn't like to throw things out.

Spending time at this show was entering another world. We were no longer in Chicago or even the Museum of Contemporary Art. We were in an all consuming, singular space where we have never been before and would never be again.

I already mentioned I've been to many museums. I've seen the work of countless artists. It's something I love doing.

I've never felt so strongly that a show allowed me to enter an artist's mind the way this one did. I got to experience a piece of what it is like to actually be Bowie. I learned that he truly lives the life of an artist. Not just when he is on stage. Not just when he is in the recording studio. He's living the life. He's doing what he wants to do. He takes breaks from music and focuses on painting. He has elaborate costumes he wears on stage. He has thoughtfully designed daywear.

The show made me think of an experience that I had right before Christmas last year. As I usually am, I was fed up with the holidays. That is a time of the year when Jacob's absence is even more painfully notable. The forced cheer of the culture around me, which more often than not feels depressing. Feeling exhausted with fitting gift shopping into an already challenging time. The whole thing made me feel like a fraud. If I could have fired Christmas I would have.

I got off of the subway in Brooklyn on a Monday. This neighborhood is bustling over the weekend, but on a weekday winter morning, it was quiet, and almost sleepy. I breathed in the cold morning air and reveled in the near silence.

I went into a brand new, just opened record store to do some holiday shopping for Jeremy. It was thrilling to do this because at the time he didn't know I was there. The fact that I was visiting this much-awaited new store before he did gave me a fun, slightly illicit feeling combined with a sudden sense of happiness. I anticipated the gifts I would buy him there.

I walked in, list in hand and began to piece together a musical gift for Jeremy. I combined a special box set that I knew would give him hours of enjoyment and scholarship. I also got him a biography from the store's extensive collection of music-inspired books. I also gave him a gift of experiencing the store himself in the form of a gift certificate. There is nothing Jeremy likes better than poring over music in a record store.

Of course, the store has a high quality sound system. Of course, the acoustics in there were good. Seeing as though it was close to Christmas, they played the David Bowie and Bing Crosby performance of Little Drummer Boy. It had been years since I heard it. It was a seminal experience in its beauty and authenticity. It was a sparkling moment. It turned the holiday tide for me. Bowie connected with me in a way that Crosby alone wouldn't have. Art can do that and it did.

David Bowie Is can be viewed at the Museum of Contemporary Art in Chicago until January 4th, 2015.

Read about the 1977 Christmas special and watch the video here.

Posted by Karen Capucilli at 5:46 PM