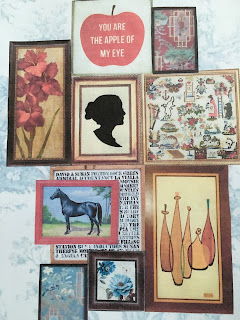 Sometimes - often - I will do some writing, a collage or photography and realize quickly that it is crappy.  In many cases, I abandon it entirely. Delete.

Other times, I salvage it. A few tweaks and then it's good. I wrote about that experience here in The Crappy Collage.

On occasion I'll jump ship on the first attempt, then re-do it from start to finish. I do this when the idea is good but there is something wrong with the execution.

If I share some writing, collage or photography that means I like it. That's the simple way of looking at it.

It might be almost perfect. But I allow for some other things to happen. Sometimes I try something new on for size and see what sticks. I might consciously decide to explore a new direction or post something I'm a little on the fence about.

For the most part though, if I share it I'm proud of it.

If I'm lucky, I stay proud. There's stuff I've made or written that I love as much as the day I finished it. These are rarified moments in artist-time. I cherish this.

There is an in-between thing that happens frequently. Time passes, and if I had it to share again, there are small things I'd change. A paragraph I'd get rid of. Something that could have been more refined. I could have shifted my vantage point a bit to the left. Cropped something out.

So far, I've acknowledged this, but left the words or the image alone. I'm more interested in moving onto the next thing. It was a moment in time and I'm willing to let that be. This isn't brain surgery. This kind of imperfection never killed anyone.

If I get anything published I'll work with my editor and address it then.

Every once in a while, something else happens. I won't beat around the bush.

There is work that I created and shared at some point in the past. This work is crappy. I did not realize it at the time. I thought it was good six months or three years ago. My intentions were good.

It took some time and distance for me to realize it was crappy.

I stay pragmatic and I stay positive. However, it sometimes takes my breath away, just how crappy something I did is. It's like the air being let out of a balloon. Or the terrible sound the needle makes scratching against an LP.

I keep it in perspective. How important is it that I shared a crappy photograph of moss in 2012? Or that a collage that accompanied a blog post is the paper and glue version of a train wreck? Bad poetry isn't the worst thing that can happen.

That's exactly how it is with the crappy memoir piece I wrote.

I write a blog post. I do what I always do these days. I write it.  I get rid of some of it. I make a collage. It had no diagonals because I am sick of diagonals. I use my computer printer in a ways that utilize classic printmaking techniques with an irreverent twist. The entire effect is beautiful.

I have a satisfied feeling that comes from doing a good job. I am proud of my work.

But then it occurs to me that I was proud of all the other work I did before and then at a later date I realized that some of it was crappy. Furthermore, there wasn't much rhyme or reason to which work had staying power and which work would become crappy later.

That's when I realize that I might have just finished some future crappy work!

I sit with the worry for a little while. Then I let it go.

It's easy for me to not publish crappy things in real time. I'm not an idiot. I’m not lazy.

The only way to avoid sharing work that I am sure wouldn't ever be crappy later would be to make work and then sit on it for several years before sharing it. Then after a decade, I could see what was still good.

Or I could keep working and working without sharing until becoming a near perfect writer or artist or photographer. I'd emerge, fully formed seeming like an overnight sensation or hidden genius.

These ideas are romantic and not without appeal.

Here's why I'm not doing it.

When I was younger there were limited ways of sharing your work. There was no social media. You could be in a gallery show, you could be published in a book or magazine, you could get commercial assignments, you could show your portfolio of carefully crafted prints to other people.

I did all of these things. But there could be long, lonely spaces between shows, assignments, and publications. Things remained buried in drawers and clamshell boxes. Sometimes I couldn't get anyone to look at my work.

In the best of all worlds, I'd shoot beautiful still life photographs that almost no one would see for six months because that was the lead-time of the magazine.

I wasn't made to work in isolation. Social media is one of the best things that has happened to me.

There is something democratic with all of this. In a global sense, there are no gatekeepers. Our lives are crowded with crappy work that we now need to delete, filter or ignore. Some people dislike this. There's no one keeping the riffraff out.

I've said it before. The cream will rise to the top. It always does.

So if you look and read, you'll see my process. It's not a fairy tale. That would be a lovely work of fiction. You never know. I might just write that fable someday.

You may also enjoy:
Lying In Wait
Percolating
What's Good For Us Now
Posted by Karen Capucilli at 5:49 PM No comments: