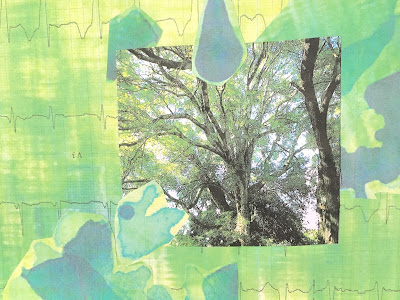 It seemed like maybe this wasn't goodbye. Then of course, it was.

I had all kinds of words to say to myself. The experience will live on. There's a part of this that doesn't die. Things will go on in a different form. You're always with me.

The fact remains. I can't talk with you anymore. That's a tough pill to swallow.

So I told myself that this is the beginning. I know it's ended now. There's no more of this to come back to.

Every day is going to get easier. Now I've hit bottom. Once bottom is achieved there is nowhere to go but up.

I sat with that for a few minutes. It sounded good. Unfortunately none of it is true.

Things will look up. Then they will plummet down again. There might be a gradual upward course, but it won't be a straight line. There will be ebbs and flows and unexpected turns. It will move from side to side.

I had to sit down for a few minutes. Then I proceeded to adjust to this trajectory.

You might also enjoy:
Lying In Wait
Nothing
Grace
Posted by Karen Capucilli at 5:23 PM No comments: 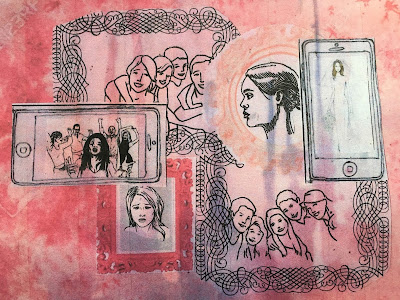 You are here and simultaneously nowhere. This is where you are not.

Not in this vista, on this rooftop, in this foreign country, or your very own city, with these people. This one is with that one, the people you introduced, the people you forgot about, the ones you still long for.

Today, you feel the smart of not having a table number, not being at karaoke, not buzzed on cocktails splayed across a couch, not arms around each other, not laughing hysterically while the person taking the picture tries in vain to get a good picture of all of you.

You are not an infant. You tell yourself how expensive weddings are, how this is an exception, how people are busy, how not everyone can be included, how sometimes almost no one is included.

You allow yourself no self pity because that is a waste of time and make an inventory of your better friends.

You don't linger there. You like them anyway. Or not.

But there's this one time. You wade further in for some reason. You let the sting sting you longer. You sit with it.

You learn that the blue cast isn't the end of the world. Nobody will throw you in jail for feeling sad.

You remember the work of Margaret Mead. Like it or not, you're a primate. You're part of something bigger than you. Of course you feel bad. It's how you've been made.

You're with a friend in her sunny loft. She takes a quick break from the conversation to return a text. Her other friend does the same. You take a fast look at social media. Just for a moment.

You see what you see there. And you're not there.

Not to mention the people who you will see later today, not talk with but text, the strangers on the train, the loved ones, the future friends, the friends reconnected.

You're with who you're supposed to be with, where you should be. The other people you were thinking about before are just the people who live inside your phone.

Emotional Support From The Security Guard 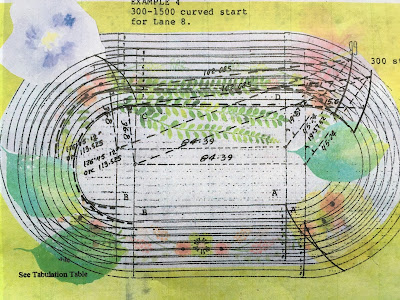 I like to go to this running track in my neighborhood. Right before you go in the gate you see this man who sits in a booth. He isn't just any man. He's the security guard.

He waves me in. I always say hello, goodbye and thank you. I am trying to be on friendly terms with this security guard. One reason for this is that I am a very nice person.

I do have some other motivations which are self serving but generally harmless.

If possible I would like to become allies with this security guard. I'm hoping that if he sees me enough he'll wave me in anyway, even when the track is closed for stupid reasons.

Some of these stupid reasons include a tiny bit of ice or snow on a small sections of the track, an unscheduled Columbia sporting practice where there is still plenty of room for me, or unknown random events that are not visible to the naked eye.

I like to imagine the security guard, sitting in the booth and maybe glancing up from his phone to notice the recovery process unfolding from my broken ankle. When I first started using this track, I walked very slowly until my ankle hurt, then walked even more slowly. Then I started to slow jog a bit. Now I'm jogging more and more.

I haven't been expecting anything but once or twice he gave me a thumbs up.

Today he waved me in.

I did my usual routine. My physical therapist has taught me all about alignment. She's also trained me to be aware of my entire foot surface. Going to the track and exercising is almost like a walking mediation. That's how good it is.

I did some cardio for 30 minutes. I was almost to the gate when I stopped and took some photographs. The sky was very opaque, which made for some interesting relationships with the bleachers, the trees, and the light.

As I'm exiting the gate the guard stops me.

Why aren't you smiling today? He asks. His friend is there with him, hanging outside the booth. What's up? the friend asks.

I've had a hard weekend I said to them. But going to the track helped a little bit, I added.

What were you taking pictures of? The security guard asks. Yeah, said the friend. We were wondering.

When they said pictures it came out sounding more like pitchers.

So as I'm getting ready to go the security guard gets pretty direct with me. Next time I see you I want you to be smiling, he said.

So I said okay and walked off, when I was a few feet away I gave a little wave. This exchange put a spring in my step on the way home.

I have friends who know where I was yesterday and what I was doing. I'm not mad at them for not checking in. Until I went to the track, I hadn't really thought about it.

The security guard knew something was up. That was a breath of fresh air. You never know where your support is going to come from or who your friends may turn out to be.

You might also enjoy:
What I Know, What I Don’t Know
Lying In Wait
The Hatchet Job

Posted by Karen Capucilli at 6:43 PM No comments: