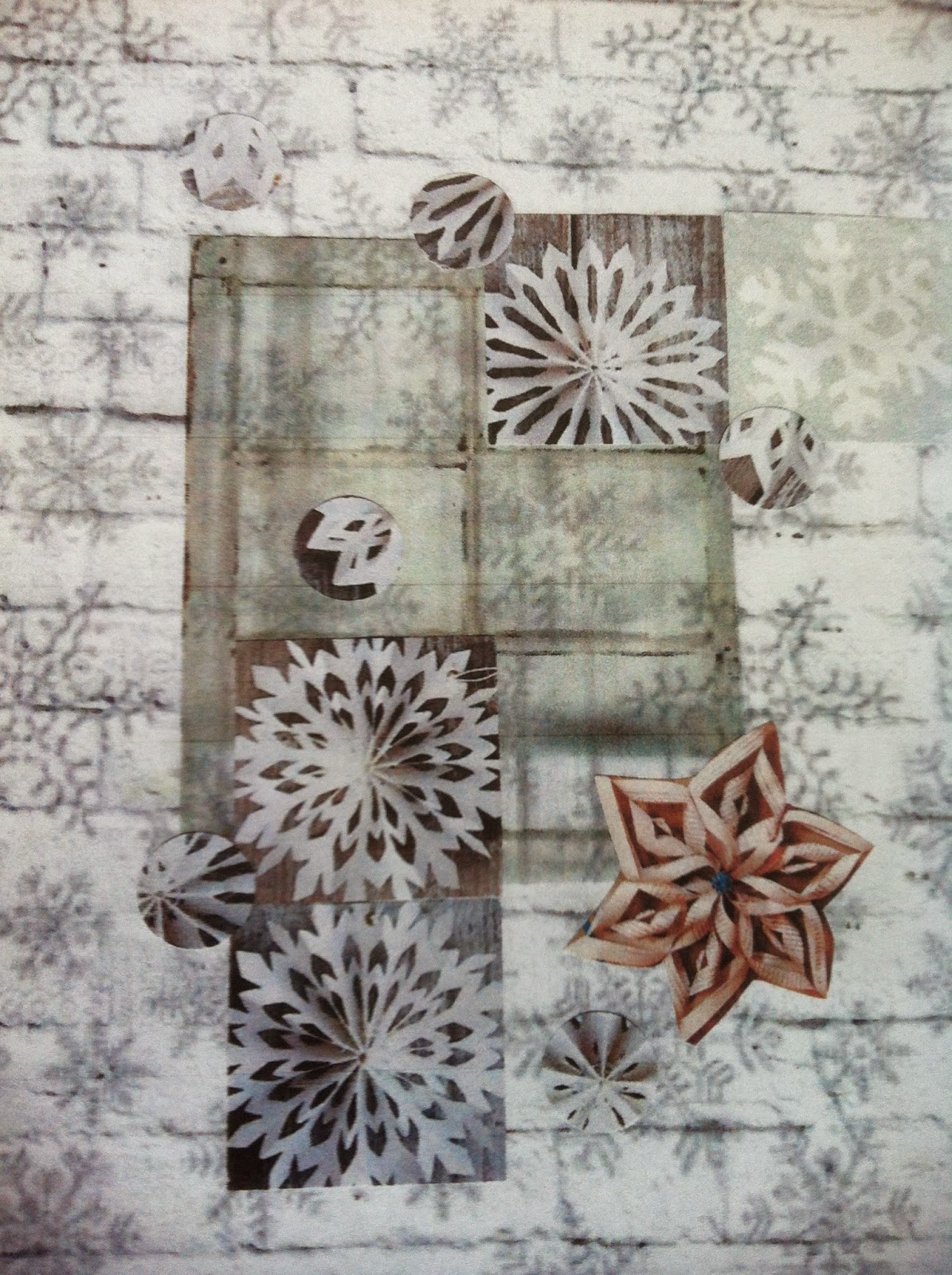 The blizzard was named Juno. It was supposed to be historic.

I prepared for the blizzard. It was mostly common sense. I do grocery shopping weekly. The weekly shopping I already did would get us through any storm. I changed one appointment to earlier in the day. I checked the flashlights and batteries. I urged Jeremy to bring work home rather than work late.

I did not go to big box stores and lay in tons of supplies. I saw people doing this on the news and it got me thinking about Blizzard Hoarding. I've never heard this terminology before because I just made it up. That said, I think this concept has some merit.

I set aside small, discrete periods of time to watch blizzard coverage. It turns out that I like watching speculation about blizzards and how bad they are anticipated to be. I enjoy watching news conferences about the blizzard with the mayor and the governor.

I enjoy watching blizzards out my window. But it seems that it is not enough to simply look at snow falling and wind blowing from my apartment. I must also watch the blizzard on TV. It is life affirming to watch New Yorkers banding together in scrappy, innovative ways. It gives me perspective to watch how bad things are in Islip. Things are always worse in Islip.

So if I didn't set aside specific periods where I allow myself to do this, I would be doing it all the time. I permitted myself to watch it while folding laundry. I watched right before going to sleep when my brain is not on full throttle anyway.

I woke up the next morning and went over to the window. It was cold and windy. There was snow on the ground. I could see that it was less than was predicted. I figured that the blizzard had changed direction at some point.  This has happened before. It's also gone the other way. Sometimes weather is much worse than you think it will be. That's weather.

I wouldn't have thought much more about it except that I went on Facebook. I also turned on the TV. That’s when I realized some people were very emotional about the blizzard.

The negative reactions New Yorkers had about the blizzard fit into some basic categories.

Political reactions
Some people were very upset with NYC Mayor Bill De Blasio and NY State Governor Andrew Cuomo for holding press conferences and then shutting down the subways and busses. They called them fascists because they did not allow people to drive without incurring a fine. The same people said that NYC and New York State are turning into an actual fascist state. I belong to a very special political party. It is called the better safe than sorry platform. So I think the next time there's a bad forecast, they should do it again. I think it would also be good if they shut everything down for the next gentle snowfall. Or really hot summer weather. I'd enjoy that.

Conspiracy theories.
Going hand in hand with fascism, was the idea that the forecast and response was all part of a conspiracy to distract New Yorkers from more important matters. Apparently the news media, Al Roker, Bill De Blasio and Andrew Cuomo were all in cahoots. If this is true it may have worked. The day after the storm, many people were distracted by conspiracy theories and lack of snowfall.

Just because you're paranoid does not mean that the weatherman and the mayor aren't out to get you.

Wasted supplies and wasted time getting supplies
Some people were upset that they bought a lot of extra food and other supplies and spent time waiting on long lines and going to multiple establishments. They felt that getting the supplies and then not losing electricity, heat or contact with others was an affront.

I'd like to suggest that New Yorkers shift focus next time there is a blizzard forecasted. How much food do you really need to eat during a blizzard?  This laying in of food is a missed opportunity for New Yorkers to engage in something trendy. That is fasting, cleansing and juicing. If you lose electricity, then you can't use the blender. You can still mash and whisk. You can still fast.

Having to go to work and having to leave the apartment
Until this blizzard, I didn't know just how much many New Yorkers enjoy staying in their apartments and how much they hate their jobs. The fact that the blizzard was mild and people were able to move about freely come Tuesday afternoon was deeply disappointing to many. Rather than feeling grateful that work was closed on Tuesday, some people were apparently expecting their businesses to be shuttered until March.

People were jealous of Boston because those people stayed home longer. They had been counting on the blizzard to interrupt a day-to-day life that has grown tired and unbearable. That's a lot of pressure on one blizzard. Maybe the blizzard isn't the main problem here.

People from the Midwest and upstate New York criticizing New Yorkers and the lame blizzard
During other weather events, I have been guilty of this. I come from Syracuse. I went trick or treating with my costume stuffed into my snow pants.

Other places got more snow during Juno. Other places get more snow on a regular winter day that NYC ever gets. That is not because you are superior or did anything right. You did not invent heavy snowfall. It just happened. It's the weather. It’s the lakes.

In the end, I was not bored, disappointed, or paranoid about the blizzard. I did not feel jealous of Boston.

I went for a walk on Tuesday afternoon and took these pictures. The blizzard wasn't historic. But it was still interesting and beautiful. I liked it a lot. These are the photographs I took before the snow got dirty. We're supposed to get more snow soon. Well see what that brings. I'm good either way. 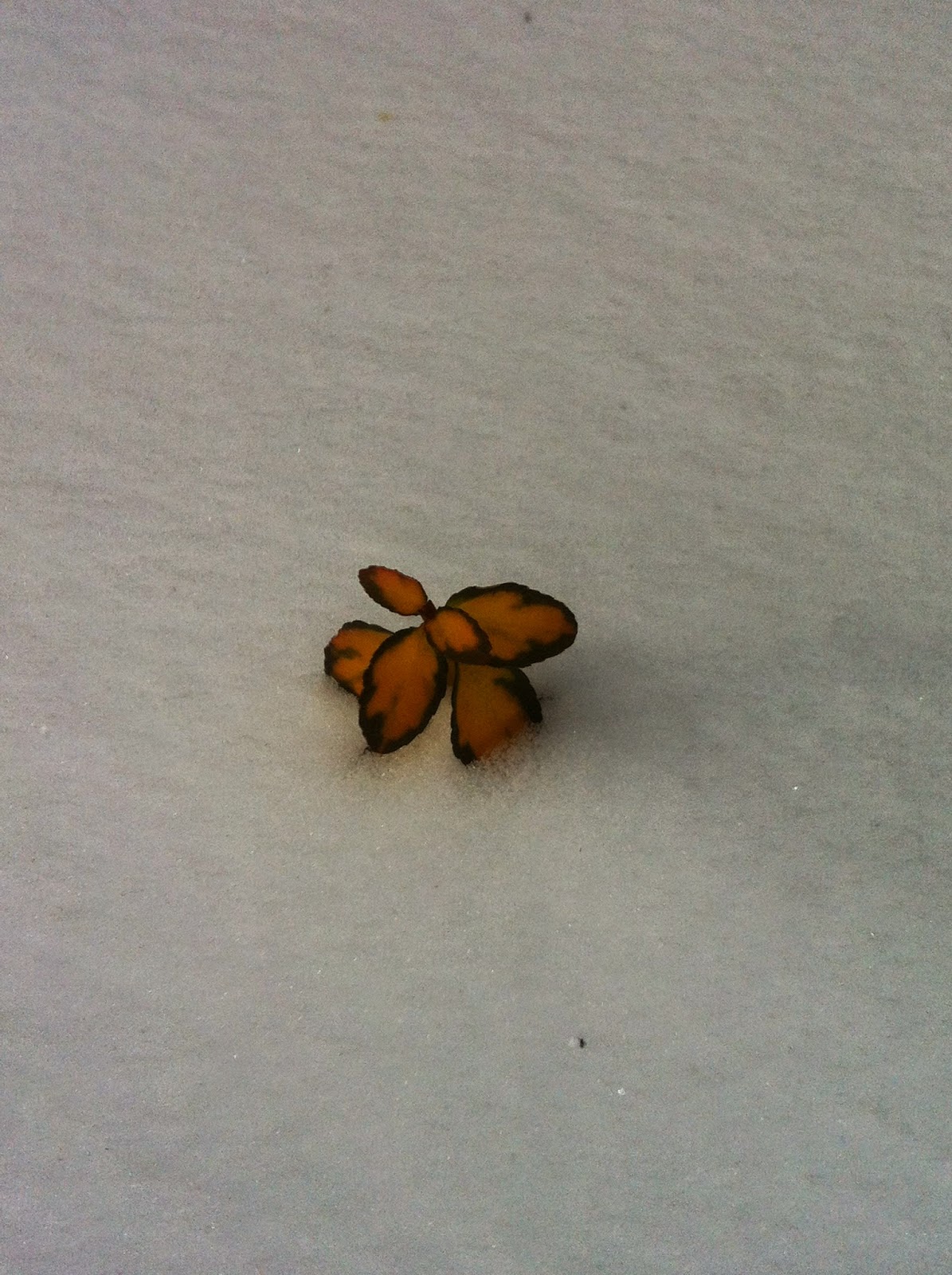 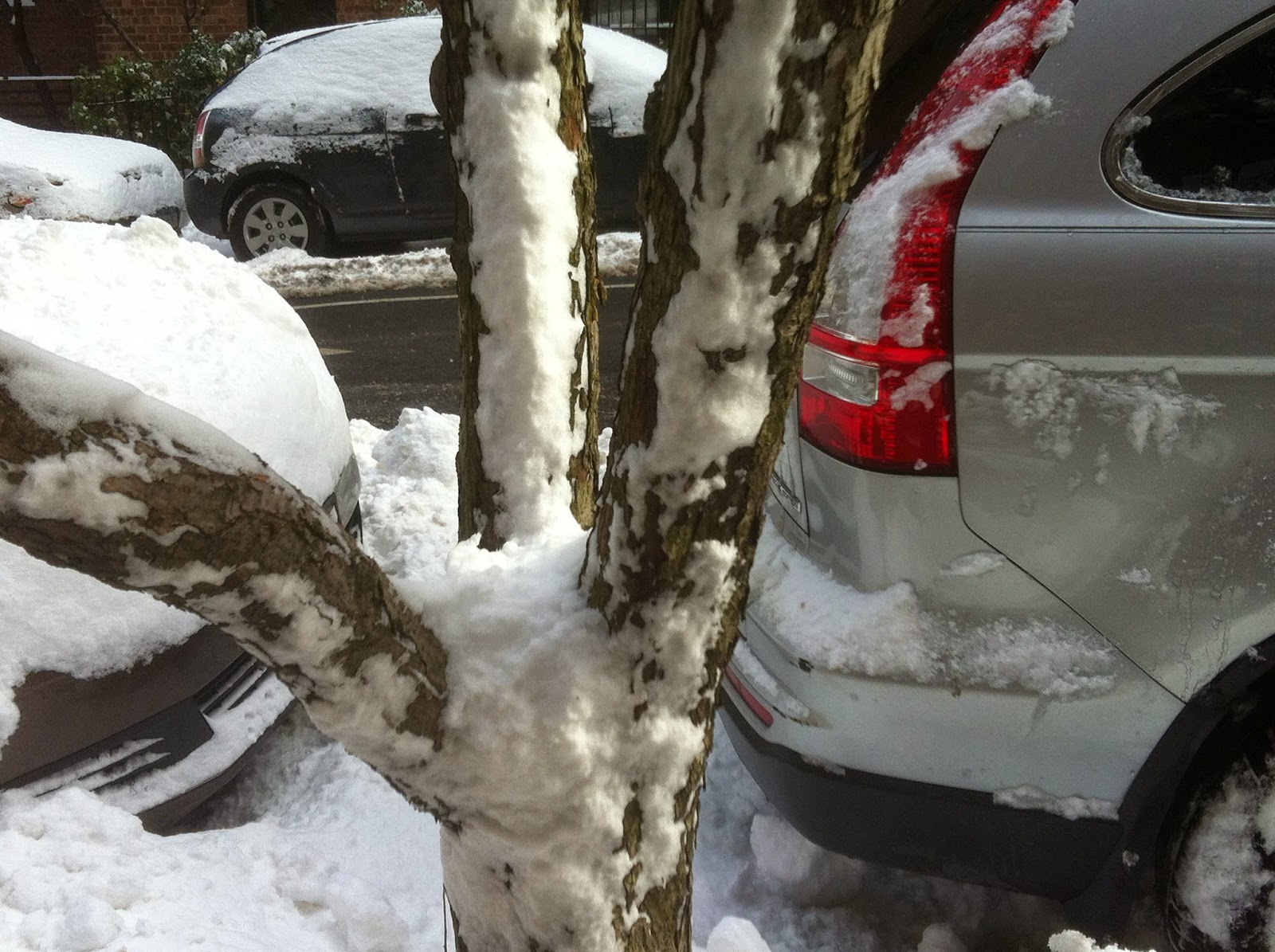 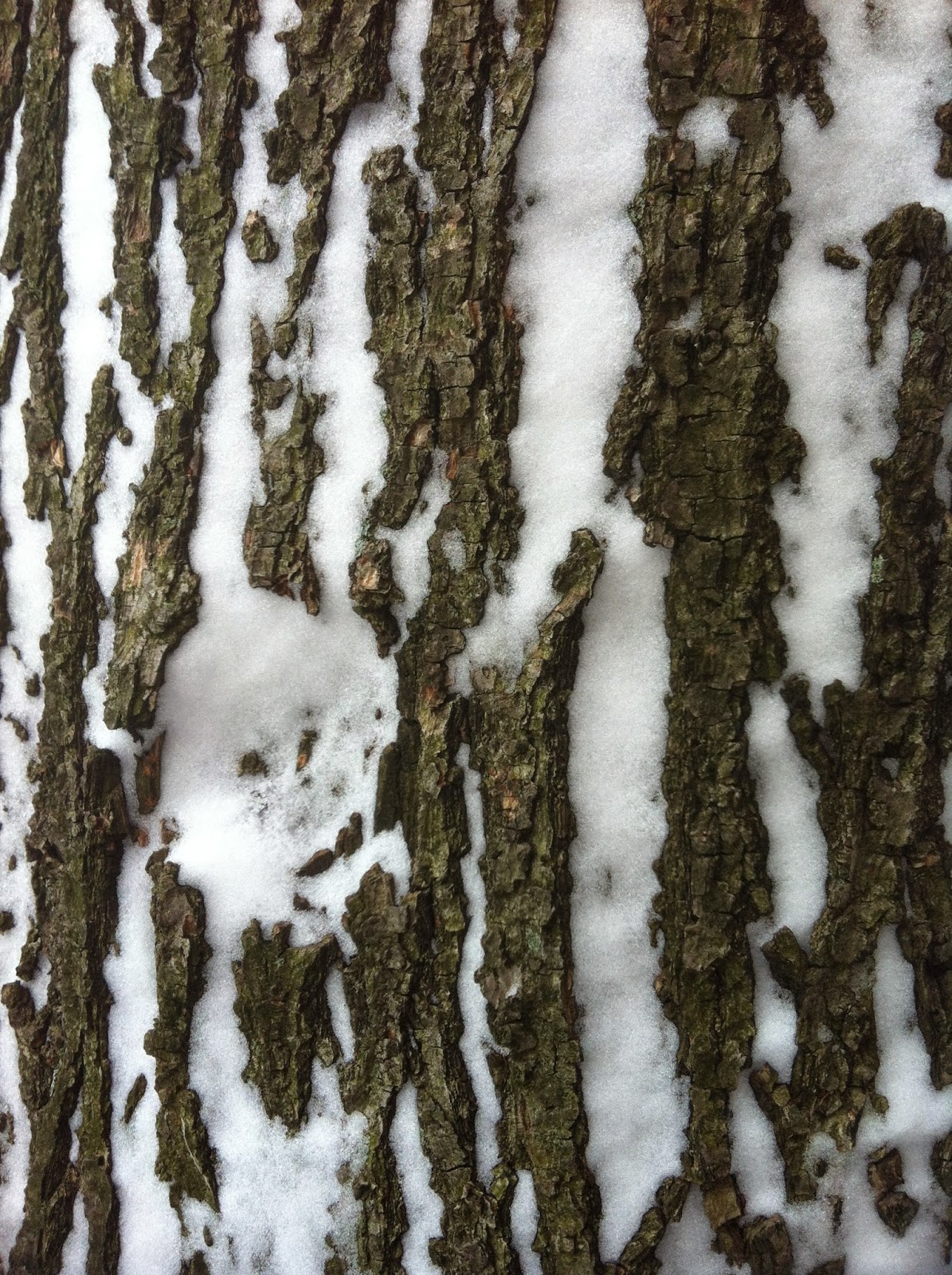 I love it when snow gets stuck in the bark. It's like punctuation. 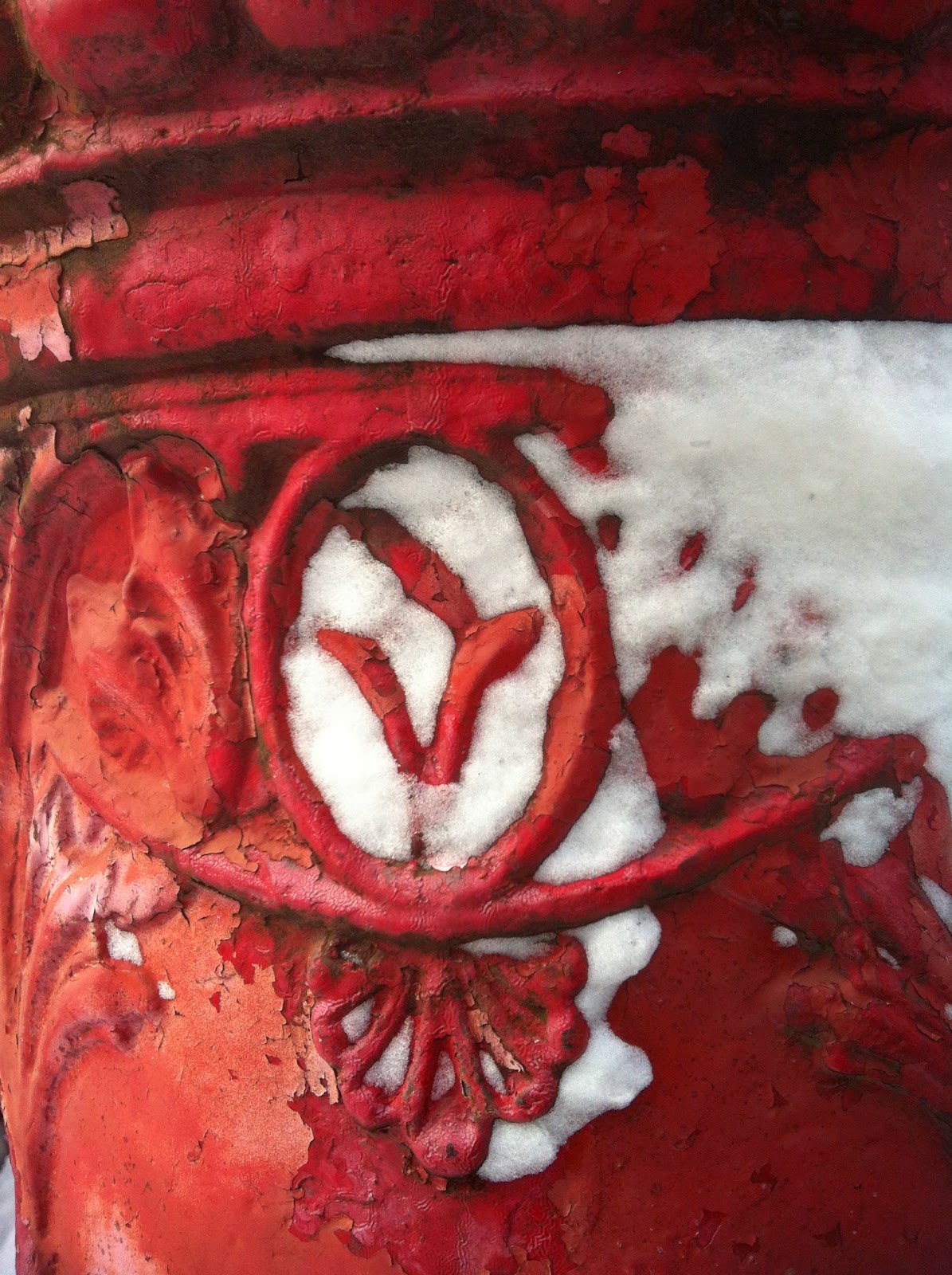 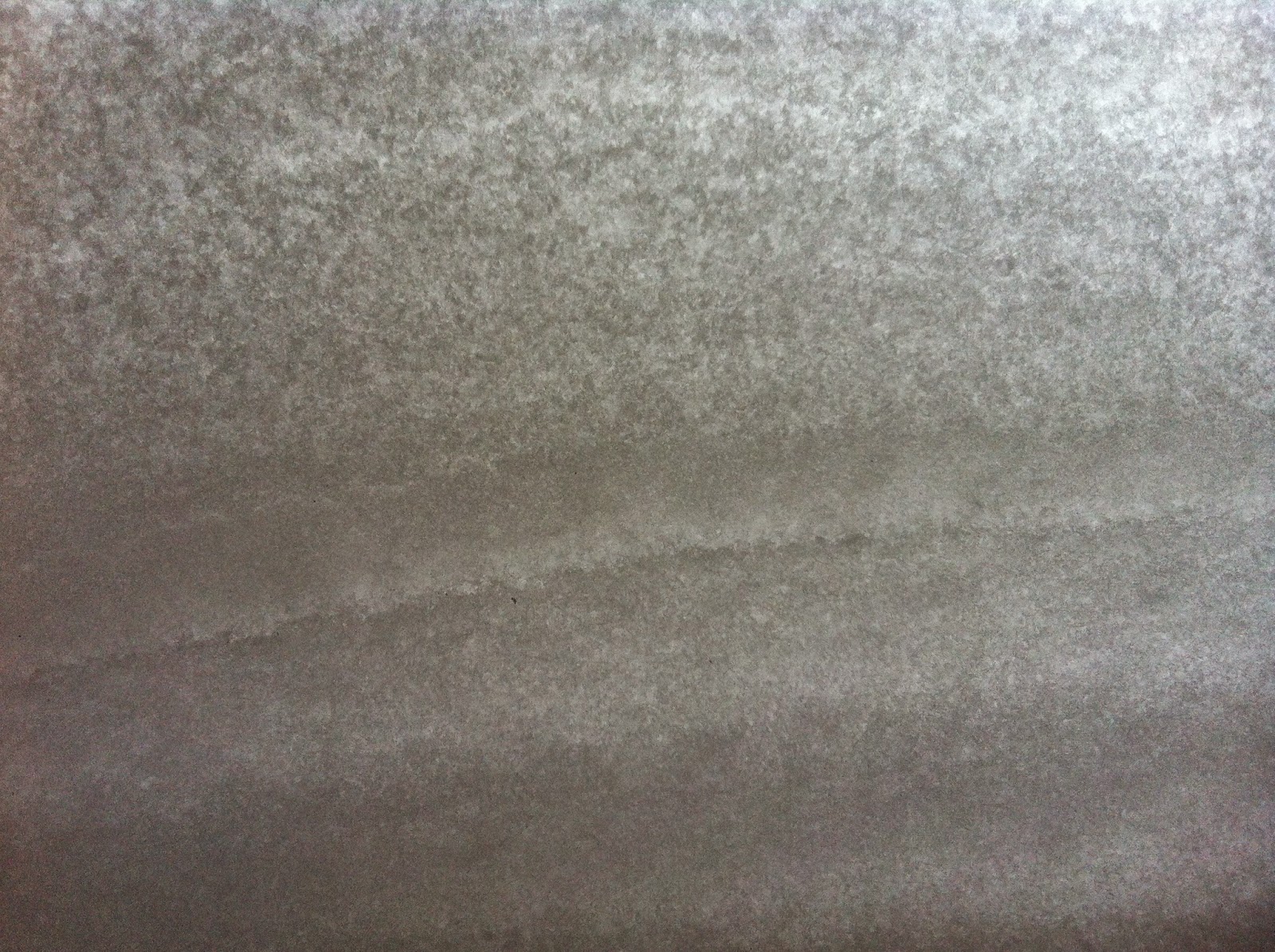 These snowdrifts form on the outside sills of one of our windows. This one was about 8 inches high. It was fun opening the window and taking a close up. 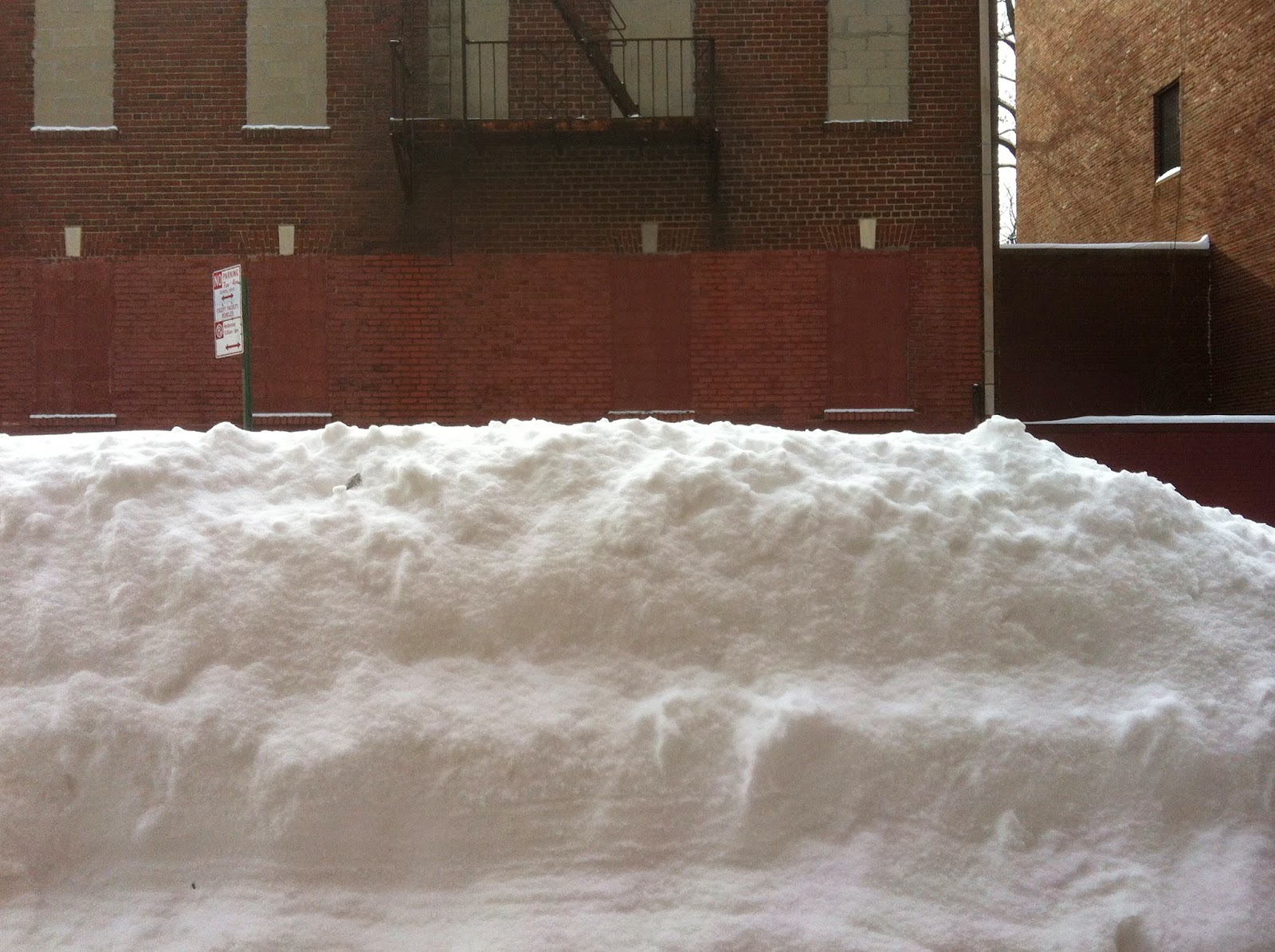