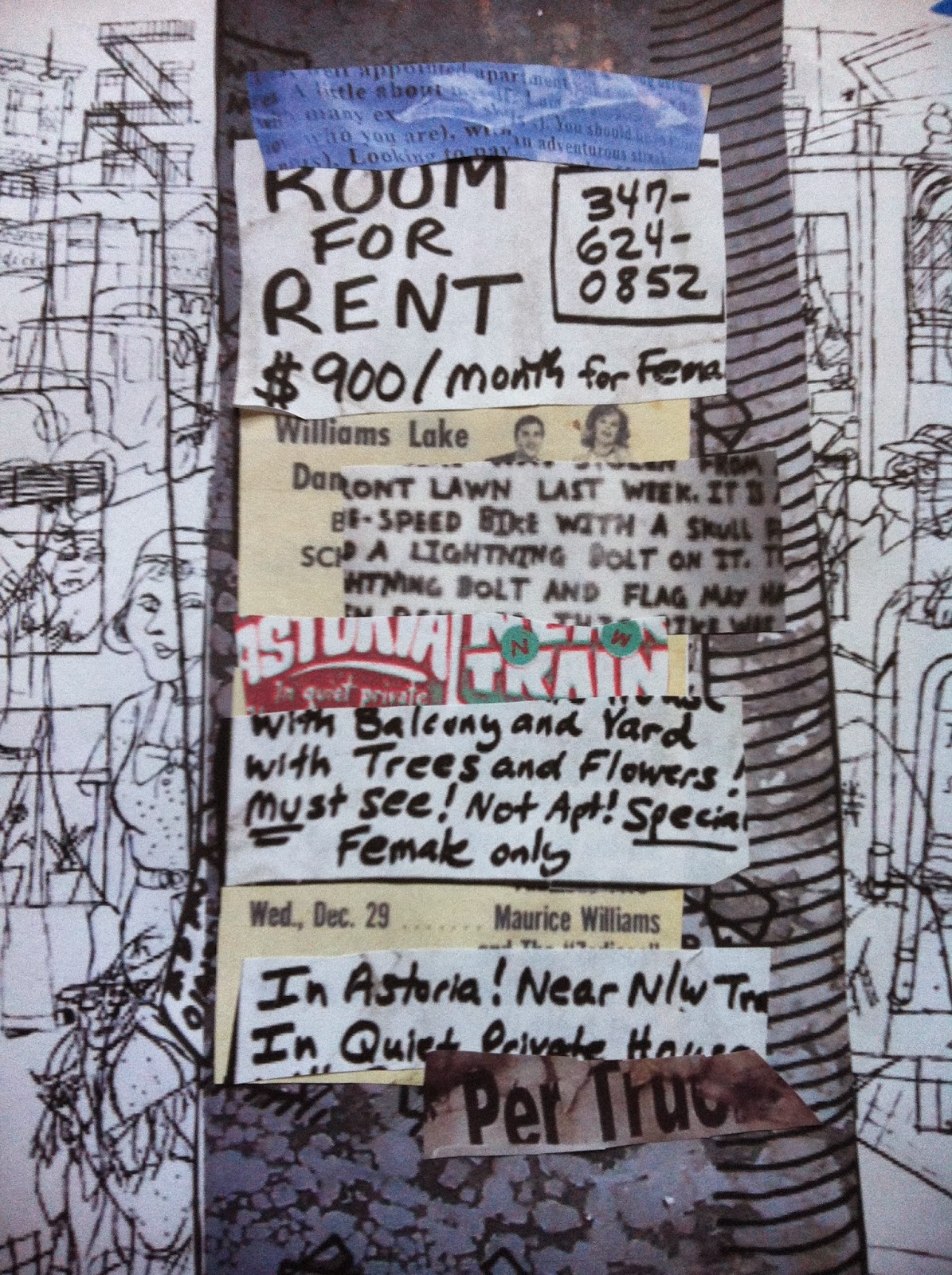 I walk briskly to the corner. I pause at the streetlight and wait. I stopped jaywalking six weeks into my first pregnancy and never took it up again.

It's a long light. My eyes dart toward the pole of a streetlight six inches away. It doesn't register with anyone else. I wouldn't expect it to.

My eyes rest there. I take in the flyers affixed to this lamp pole with heavy clear tape. There are flyers on top of flyers. I pay attention because I have a photo series I'm working on of stuff like this.

My hand feels for my iPhone camera resting snugly inside my mitten. The layers of no less than five different flyers look like they are woven. The tape is a silvery etching. It rained two days ago which means the colored ink has run and then dried.

Two years ago, I would have run with that moment. Even six months prior, it would be a toss up. I might have taken this picture.

I don't capture the flyers this time. I already know what would happen if I did. Along with the obvious beauty of this situation—the painterly palette, the collaged elements, the truncated typography, the juxtapositions—comes a fatal flaw.

There is a shard of bright white paper under the clear tape. It's small, but jarring and looks unnervingly like the boot of Italy.

I almost never see anything discernible in my sea of abstraction. But when I post my photographs on social media, other people do. They see faces, aliens, and things that remind them of something else. They see body parts, animals and geographic references. They love to post what they see in the comments. I think it makes them feel clever.

Unfortunately, I don't like this and if the paper looks like Italy to me, then I can only imagine what other people will see and then dutifully tell me.

Previously, I might not have noticed all of this until after taking the picture. I would have taken it and then realized that it was almost good but not quite.

Even if I did notice the white boot, I might have shifted my camera around in order to crop it out. But with the weight of time and experience I've learned a few things.

In this case, if I were to angle the camera in such a way to crop the white boot, I'd also be eliminating everything beautiful in the picture. Cropping out the ugly part would also mean cropping the lovely colors, the words, the edge and the artistry. I don't need to try. I already know.

As if on cue, the light changes and I cross the street, leaving this opportunity behind.

I've made similar assessments on the rest of my trip home. There are photographs I reject because they are fine and perfect but look too much like pictures I've already taken. To take a picture that similar it has to be a lot better.

There was the beautiful trash that was almost good but the paper cup was split in such a way that made it look ugly-ugly rather than beautiful-ugly. I'm learning to toe that fine line. It's too bad about the sinewy crack in the sidewalk underneath the cup. That was really pretty.

But then the planets align. I see a leaf that's flattened itself as to become one with the sidewalk. It's faded so that it's a subtly warmer color than the pavement itself and very similarly textured. I take three variations of this whisper of a scene. I'll choose the best take when I get home.

Since I have so many photo series going at once and I'm sensitized, the ones that got away, the ones that didn't make the cut and the ones that I would have taken a small lifetime ago don't bother me. There's a bounty. That is something I've learned I can count on.

I started photography class in 10th grade and majored in it in college. I had great teachers along the way. All of these people were generous, brilliant, patient and kind. But iPhone camera with its immediate feedback has been one of my best instructors. The rapid fire composing and deleting. That's a lot of learning in a short time.

I could do these things, but I don't. If it isn't in the viewfinder, I'm not interested. I don't use apps either.
Posted by Karen Capucilli at 11:20 AM