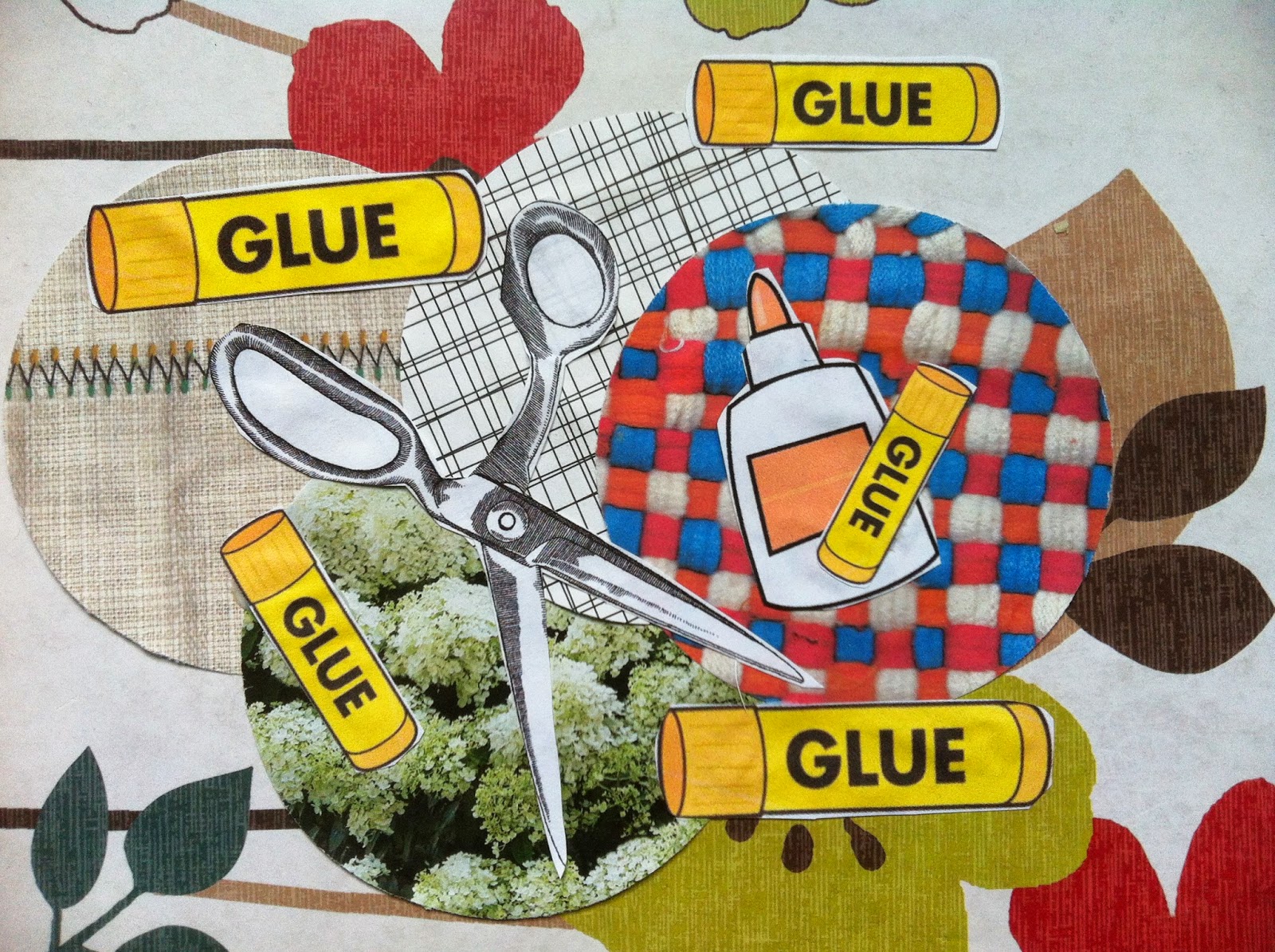 If you happen to be reading my blog for the first time, let me share something with you. Every time I write a blog post, I make a collage to go with it. For me, blogging and collaging just go together. If you have read my blog before, you already know this about me.

One day recently I wrote a blog post. Naturally, I began making a collage. It was coming together a bit more slowly than usual. I wasn't enjoying the process as much as I normally do. I didn't think much about it. Some days are just like that.

At one point, I considered this collage finished. I didn't want to overwork it. I took it over to my usual photography spot, on top of the flat part of our treadmill. The natural light is really good over there.

I left to run some errands, and pick up Noah at school. While I was out, I was aware of an uncomfortable feeling. I got out my iPhone and looked at the photograph of the collage. I kept putting the iPhone camera away, then getting it out again to look at it.  Finally, after doing this several times, I came to a bit of a difficult realization.

I had made a crappy collage.

This was a very annoying revelation. It was inconvenient. I had set aside a certain amount of time to do two collages. I had been counting on this one being in the can so I could start on the next one. I didn't have all day.

I quickly overcame any resistance I was feeling, and entered the acceptance phase. My thinking changed from whether or not this was a crappy collage or just how crappy it was, to what to do about the crappy collage.

Previously, there would be only one choice for me regarding this crappy collage. I would have to scrap it and start all over again. Anything worth doing right was worth doing perfectly.

I used to be a perfectionist. I didn't think this was such a bad thing, until I wasn't a perfectionist anymore. Once I'd had a massive paradigm shift and this way of dealing with things became a thing of the past, I realized that the previous perfectionism was keeping me from doing anything in a lot of situations. It kept me hostage. It could be paralyzing.

Things feel liberating now that I'm in a different place. If I were to explain how I came to the place of being less of a perfectionist, there would be a short version and a long version of that story.

The short version is extremely short. I could probably confine myself to one word. For the longer version, it could take a good twenty minutes of history and detailing. I am not inclined to tell you either the short or long version now.

I don't rule out a future blog post titled How One Person Broke Through The Self-Imposed Prison Of Perfectionism or Not Perfect And Lovin’ It. If you would like to see a post like that someday, just keep on reading my blog.

I seriously considered this because I am experimenting with the idea that sharing a crappy collage, crappy writing, a crappy photograph, or even engaging in occasional tiny bits of crappy parenting is not the end of the world. There is much to be said for just getting something done and out there.

The third option was to take an in between approach. I wouldn't just post the crappy collage. I wouldn't start all over again and throw it away. I would work on it some more, without becoming totally obsessed. I started to really warm up to this idea.

I considered just what was making this collage crappy. The main problem was that it was static and boring. I'd had a pre-conceived notion of what I wanted to do in this collage. I had achieved what I set out to do. However, the results were flat and less than exciting.

What this collage needed was a little well considered dissonance. I did some brainstorming on the subway. When I got home, I quickly cut out some elements from magazines that added some color and surprise, while still making sense for the overall concept. I also found some stuff on the Internet.

The process of finishing it took about twenty minutes. I then got started with collage #2 and that one came together rapidly. I got into a pleasant flow state, which is what usually happens when I make a collage.

Then I took them both over to the treadmill and photographed them.

In case you're wondering which collage was the formerly crappy one, I'm not saying at this time. Since it turned out well, it is all water under the bridge as far as I'm concerned.

If you're thinking that all of my collages are crappy anyway, I have considered that possibility.  I might like them all now, but think they are crappy in the future after I become better and better at making collages.

I have chosen not to dwell on this. I will cross that bridge when I come to it.
I'm not going to worry about something that might never happen, like my changing my mind about all of my collages.

I’m also not going to worry about who likes which collage, who thinks they are all crappy, who doesn’t like anyone’s collages no matter what, who thinks that my collages are wonderful, but that my writing is crappy. I'm going to just keep making collages, and see what happens.
Posted by Karen Capucilli at 1:39 PM